Page:
shadeauxMember
Editing cause it made no sense. lol

Pete, NOW I need Taz's little rotflmao smileys! And I just thought my ribs hurt before.

tazfrompaMember
Well alrighty then Pete as long as you took I was sure you were a Hunt and Pecker. But the joke was worth the wait! I must sign off now for sure 4 AM is rather late for me when I need to be up at 7 AM!
Night All. Have fun!
12/21/071:02 AM
❤️ 0
shadeauxMember
G'night Taz. Sweet dreams.

I'll say g'night now Pete and hope you have a great day!
Hi to Ninth if ya stop by.

One day a Pirate and a bartender were talking to each other in a bar. The Bartender asked the pirate "Where did ya get that peg leg from?"

The Pirate responded "We were sailing the seas when a big ol' shark came up to me while I was swimmin' and bit off me leg."

Later the Bartender asked "Where did you get that hook then?"

The pirate responded "Well, me crew and I were in a battle and it got cut through the bone."

The bartender then asked "Then where did ya get the eye patch from?"

The pirate said "In a harbor, I looked at a gull flying over head and it took a dump right in me eye."

The bartender was puzzled and asked the pirate, "How would that make you get an eye patch?"

Glad no nasty issues have reared their ugly heads for you today. It's Friday (or is it Thursday there? Surely not Saturday! Always confuses me

You probably have a giant coffee in hand too, just like I do!
I hope I have a happy Friday, since I have to go back to work tomorrow and Sunday but at least I'm off Christmas Eve and Day. As I said somewhere else, I'm glad I've been off this past week so I could participate in this foolishness

tazfrompaMember
Hello All. Still no Ninth I see? Hmmm he starts us up and then leaves us to fend for ourselves. I think we are doing quite well though!
12/21/079:13 AM
❤️ 0

handlepMember
Shirley, you soppy wotsit, we're only 5 hours ahead, we're not on the other side of the world!

I've just logged off from work, so assuming nothing brown and nasty hits the fan, I'm done for the weekend

I told you it confuses me. LOL

Where ARE You Ninth?
12/21/079:32 AM
❤️ 0
member8880Member
See what I mean about the way Brits talk?? (BIG smile) Dontcha love it? I'm always watching the BBC network here, 'Couplings' (talk about laugh til you cry!) and the all time favorite Dr Who.

Aha, I see our other soppy wotsit has also surfaced! Hi Susanne

No Steve yet? Don't worry, I won't call him a soppy wotsit

quote:
A 'soppy wotsit' is actually one of the most deliciously beautiful womon on the planet Shirley

handlepMember
You don't believe me???

What does gmta mean anyway?

quote:
No Steve yet?

I posted 25 minutes before this post!Just because I went out for a few shants and scoops last night does not mean I am among the missing today!
You just have soopy wotsits on the brain
12/21/079:49 AM
❤️ 0
shadeauxMember
gmta = Great Minds Think Alike - our posts were at the same time.

quote:
gmta = Great Minds Think Alike - our posts were at the same time

tazfrompaMember
Dear Abby,
My husband is a liar and a cheat. He has cheated on me from the beginning, and, when I confront him, he denies everything.

What's worse, everyone knows that he cheats on me. It is so humiliating. Also, since he lost his job six years ago, he hasn't even looked for a new one. All he does all day is smoke cigars, cruise around and bullsh*t with his buddies while I have to work to pay the bills. Since our daughter went away to college he doesn't even pretend to like me and hints that I may be a lesbian. What should I do?

Grow up and dump him. Good grief, woman. You don't need him anymore!

tazfrompaMember
Shirley here is a suggestion for a new product line. You could sell them as redneck peanut smugglers! 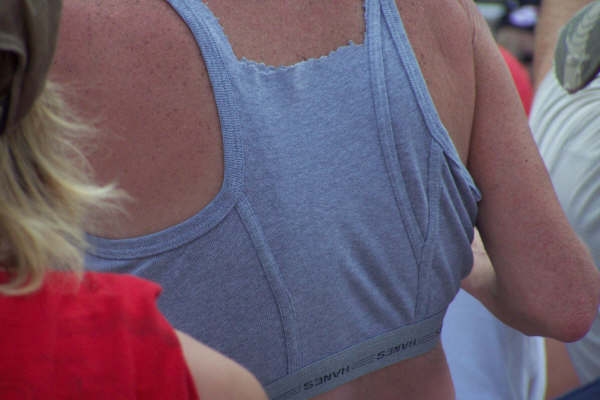 I was so wishing I'd have invented the toe sock undies thingies... can't remember what they're called. lol

Here's one and I gotta go to the store. Gotta stock up. Blizzard's a comin'! Gonna get that snow! Woohoo!


The owner of a drug store walks in to find a guy leaning heavily against a wall. The owner asks the clerk, Whats with that guy over there by the wall?
The clerk says, Well, he came in here this morning to get something for his cough. I couldnt find the cough syrup, so I gave him an entire bottle of laxative.

The owner says, You idiot You cant treat a cough with laxatives

tazfrompaMember
That is classic Shirley! I love it! But I must confess you have intrigued me with

Please don,t let us hanging find out what they are called and show us pictures

EDIT:OK Shirley Blizzard? Snow accumulations of 1 inch in Amarillo may be a blizzard to you but that is not even snow tire weather here!
Hey we did say we would send Ya snow to make snowballs!
12/21/0710:21 AM
❤️ 0

handlepMember
Sorry Steve, I must be going senile mate!

OK folks, OH is not too well, so I have to sort little son out, so knocking off now, and will chat again at some point over the weekend, I'm sure.

Ok Taz. I don't want to hotlink, so here's a link. I guess that would be more of a design than an invention. lol They're from Capezio and they're foot undeez. Cool, huh?

EDIT: No Taz, that's not what they're saying here. lol It was suppose to be 2-3 inches is all. That changed this morning. You can look at the sky and tell too.
Edit-edit: Of course, that could change on a moment's notice and totally miss us. If ya don't like the weather... well, ya know.

tazfrompaMember
OK not what I was thinking. I was thinking of underwear made from socks.
However I must admit to enjoying a well manicured ladies foot even if it is wearing toe undies

tazfrompaMember
Yes I saw the edits. Glad you are getting your snow you wanted. But all you have to do is get a BIG truck and come here to the mountains of PA and you can have all the free snow you want, I will not complain.
But please bring us some warm weather and sunshine!
Getting ready to go do some last minute Christmas shopping here. Have fun!
12/21/0711:02 AM
❤️ 0
ninthwaveMember
Have you been good boys and girls?

Well HAVE you, you little CREEPS!!?

Have you been reading this thread? You do know we're trying to guess your name now right? Let us know if any of us got it yet

(Boy they guessed mine after only a couple tries but I did give a huge hint)
12/21/0712:30 PM
❤️ 0
ninthwaveMember
I be fine. Of course I've been reading this thread. How could I not? New name: Auctiva Asylum. Susanne is a great name by the way. My name? Hah! GOOD LUCK.

Auctiva Asylum - that's great!!! When do we get it? lol

Any hints for your name? How about George for which way did he go George, or George of the jungle, or hug you and squeeze you and call you George.

Taz, you're right. Somebody was playing a mean joke on me and I didn't look it up. Like that's so hard to do. lol Takes long enough to get shipping labels done - eBay's back to it's old shenanigans of the last coupla days.

And I gotta have time to hang out here.

Will it be that difficult? Time for a hint, c'mon now, I gave a BIG hint for mine....We know, you just want to remain mysterious.
Yep this is definitely Auctiva Asylum' now! I keep waiting for this thread to get pulled (like Ebay would do..God forbid you have any fun over there) but I don't know for what reason

I guess extreme silliness, especially at this time of year isn't against the rules

EDIT---As if your flashing Santa isn't funny enough, check out the look on the woman's face on the far right...Priceless!!!!!!